The Beauty of Concentration 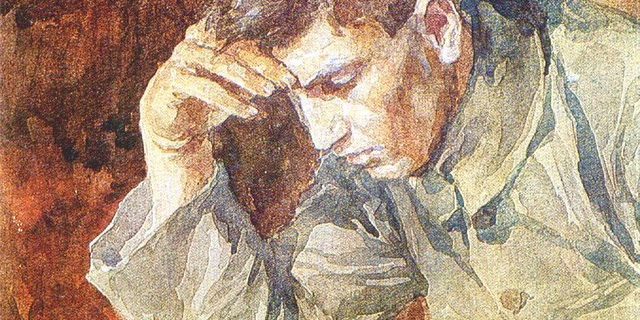 No-one likes exams, at least I don’t think they do? And yet, I catch myself nowadays almost (almost) remembering with fondness the days of being holed up swotting for an exam, especially that night before when confronted with a lever arch file bursting with hundreds of notes and a stack of books on the desk that somehow I didn’t get round to reading but must wade through by tomorrow and produce on paper in pen and ink a demonstration of my thorough understanding of everything contained in the file and books before me.

Why would I feel fondly for those times… those all-nighters when I would sit at the desk in my little single halls of residence room at Uni that overlooked a tennis court and pub and was home to not much more than a bed (with an awful mattress), a narrow wardrobe, blower heater, small black and white tv and piles of cds in the corner. From that desk I would not move for hours, sometimes for the whole night, and it was not unheard of for me to abscond sleep altogether to produce something passable that would satisfy the tutor’s probing on how much I knew, and, to justify to myself my very existence to be at Uni at all.

It may have been a strategy of ‘getting away with it’ but what I also learnt from those times was that I didn’t just have the capacity to wade through piles of information and show an understanding of it on demand, but that I could sit and focus on one task and one task only for hours upon hours. The duress of having to submit something the next day will have fuelled some of that motivation for sure, but in those hours I lost myself completely and into something else without distraction or an urge to be distracted…papers in a file became caves of enquiry and words on the page became precious excavations from that search. As 11pm turned to 1am, the anxiety (and previous day’s procrastination) of completing the task had given away to surrender to it, as 2am became 4am, the silence of the night felt nurturing and protective, as the sky turned pink and the sparrows began flying between trees and across the tennis courts, I felt like I’d been on a journey with the universe – and the universe only – as my companion.

Fast-forward, and ‘fast’ being the word, to 2018 and the opportunity to fully focus and for a sustained length of time is elusive. It isn’t just that I am an adult and don’t have a tutor breathing down my neck, or an 11-plus (and parents) dangling a future promised land, or a severe, rotund shaped piano teacher with mouth corners stuck at 180 degrees assessing my every note, or a driving instructor (who didn’t like women) marking my road skills, or a yoga teacher in India with a stick and ready to use it, or a job application requiring an all singing, dancing and with bells’ on carefully crafted application. No, it isn’t just that I am older and have passed through the time of exams, tests and assessments, but something else happened in between those earlier years and now: the information age and the technological revolution.

The world over is caught in information overwhelm and digital technology with portable devices at the hub mean distraction is less than a micro second away at any given…second.

It is not just us being on the receiving end that’s causing the overwhelm and distraction. Well, after all, we are the ones propelling it with our own output: email, tweets, texts, social networking and pictures.

Latest stats on photos taken on phones show that millennials (current young adults) are expected to take 25,000 selfies in their lifetime – that’s selfies, not even all those holiday and meal shots. Consider that less than 30 years ago, on average we would have something between a total of 20 to 30 photos of our self by the time we passed the mortal coil. The point of taking a photo on your phone is not to store it, frame it, and maybe look at it once time has passed to show the grand children– but to share it, pin it, save it, text it, message it, email it – re-filter it and do all the above again with someone else on the receiving end.

This 24 hour flow of information, pings and buzzing and flags and notifications, and the global access to it via devices that fit our hand and are affordable to even those living in huts, is, in a way, to be applauded for its democratisation of connecting, learning, expanding and sharing.

But it comes at a price to our minds, bodies and hearts, literally and subliminally. We don’t need the brain boxes at Stanford, the media commentators or the spiritualists to tell us how. Sleep disturbance, anxiety, the feeling of overwhelm, pressure to be and look and show a certain way of being, and a dramatic lowering of attention span – it’s official, the average adult’s attention is now less than that of a goldish – are attributes we can witness all around us, and yes, let’s face it, within ourselves.

It’s in this atmosphere that I miss, yearn, for times of deep concentration. Less for any desired or fantasised outcome, and more for the very act of being immersed, focused and conjoined with one thing and one thing only for a decent period of time.

And yet, concentration carries with it in our culture a negativity, a coldness, a hardness, a ‘have to’, rather than a ‘want to’ method of applying our humanness.

We know being mindful is positive, we pay attention to something or someone when it is in our interest to, and being self-aware and ‘showing awareness’ are modern day badges of honour.

But ‘concentration’? Ah, well to concentrate is associated with hard work, discipline, boffins, fear of outcome and reluctant effort.

And yet, concentration is the very tool that elevates mindfulness to connection, attention to greater output and awareness to deeper understanding.

Looking back on how quickly I adopted yoga as a daily practice (from the very first night I discovered a class in my 20s), for me, it wasn’t just the feel of the stretches or the lightness of being I felt afterwards, but the sheer joy and opportunity of finding myself in a space void of external intrusion, demands and distractions. I was a newspaper journalist at the time, though ‘the digitisation’ of news had only just broken through. Even then, I’d had my fill, and I think it’s no coincidence that me leaving journalism coincided with the time I found yoga. Within that space on the mat, concentration deepened through the stage by stage process of getting into a posture or a cultivated relaxed state (side note, one of the reasons I don’t understand most ‘modern’ yoga – the way it’s offered and taught, is because it’s too fast, competitive and too distracting with external paraphernalia and accessories) and then being with a posture and exploring the effect of it in my body and on my breath. Or, just focusing exclusively on a step by step relaxation response within myself, while I held a posture.

I’m glad that the effects of the technology and information age we live in have started to be debated and not just in exclusive erudite circles, but if we are going to truly be able to do anything about it – and not just wait for life, the Universe or Elon Musk to come up with a solution – and if we wish to be able to navigate today and not in our next life the endless chatter and incessant visual environments we are in, then it’s for each of us to take up the challenge now and believe that we can.

Having social interaction, going to the gym and even things like meditation and retreats, are great but in these forums it’s hard to escape the ever pervading presence of digital culture and distraction (initial and ongoing engagement relying on website browsing, texting, message exchanging information afterwards, and the subjection to cacophony of sounds and images while engaged in these activities). Plus, these are still ‘distractions’, things that are external to us and take us out of ourselves. Yes, even meditation! Ok, so not meditation per se, which is itself the outcome of pure concentration, but having meditation as a pastime or regular practice doesn’t necessarily buffer against the overwhelm of information. The forums, the circles, the meetings, the event upscale marketing of ‘mindfulness’ take us away from the nucleus of the act. (Side note 2: I know as many people addicted to meditation or yoga as I do those who are addicted to alcohol or drugs. There. I said it).

So back to my old friend concentration. ‘Old’ being the word, because I mean concentration in the sense of being in private, intimate sole connection with one thing or task. I know you could be in full concentration mode while on the football pitch, at your desk at work, in the car in city traffic, or even behind the bar making cocktails. And that is a form of concentration, conceded.

But the pure concentrated energy that comes from our mind and will and full deployment of our senses on one thing and sustaining that for at least 60 minutes, without other human or digital connection or interference, the kind of concentration that devours the brain’s energy supply (fact), that’s the avenue and tool, I believe is missing from the current debate on where we are at and where we might be heading.
Martial Arts hero and philosopher Bruce Lee said ‘concentration’ was overrated and narrowed our perception, but I’m of the Aldous Huxley school of thought. The extraordinary novelist and philosopher called concentration “the moment the doors to perception open”.

And in its true meaning, it isn’t at all about completing a task or looking for something with an agenda. On the contrary, the experience of concentration accords a direct connection between yourself and where you direct your senses, or heart, or inner eye. It leads to union, and in that union the work automatically is happening: be that the literal work of engaging and noting, or the poetic work of absorbing the detail of what we are focusing on. In the detail we discover what makes it whole. In that process, time becomes irrelevant – the sky turns from night black to white to pink and morning blue – and the urge to act on a dopamine pull towards something else softens, quietens, and if you’re lucky, goes away completely.

Of course, if we stayed in the act of concentration, or if we only honoured in life what we discover while concentrating, that would be narrowing. That’s probably what Mr Lee was referring to.

But a life without concentration, and floating from one thing to the next, often overlapping and never completely digesting, is a dishonour to the human being’s capacity to drill down deep and truly connect beyond time and space.

“Normally, we do not so much look at things as overlook them.” – Alan Watts.

Life After Lockdown: before you transition
June 29, 2020