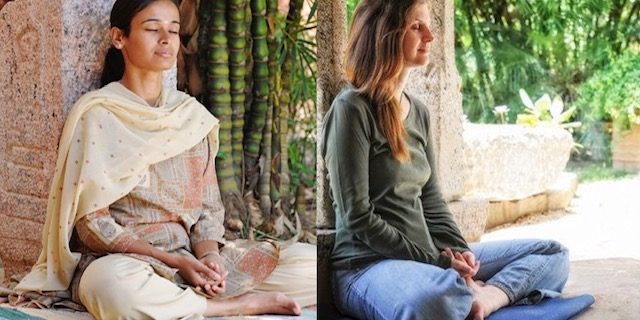 I was recently invited to an afternoon for ‘Yogis of Colour’. Receiving the email with that header subject sent an arrow into my heart – but it wasn’t a harmful blow. More like a strange hello. The inviter’s intention, as she went on to explain, was a blunt one: she had decided she was sick (literally) and tired of seeing white patriarchy dominating the yoga sphere. Incidentally, this particular yoga teacher is not someone the general public would assume or even ‘see’ as non-white. (Perhaps part of the issue). In fact, though I’d met her a few times I had no idea of her heritage until I heard her introduce herself at the gathering (spoiler alert, I went). Back to the invitation. She wanted to bring together yoga teachers ‘of colour’ to discuss how they feel about the spaces they teach in – and don’t. She was sick and tired of seeing a whitewash of a supposedly eastern practice – and – more pointedly – feeling that she herself had been a part of that or even complicit.

Even though I was born in India and to Indian parents, I can’t think of the last time anyone invited me to or included me in a race-based themed group. Sure I’ve been to ‘South Asian Cultural’ events, and I even helped found and launch a (now annual and global) film festival based on Asian Women Artists. But those kinds of things are positive initiatives that add to the current output of what is out there. It’s different to initiatives or groups that come about through an aggrievance or need.

Perhaps because I was hauled over to sunny England before my 2ndbirthday and have been a Londoner ever since (bar stints in Cambridge, south India and…er  Manchester), I’ve tended to just get on ‘with it’ in terms of the whole identity and race question. I found the ethnicity question and need to be labelled a minor bureaucratic annoyance/need. Though…

Since a little girl I was acutely aware of how people around me, be it in the playground, our neighbours, the street, shops, on TV, friends, strangers, be they Asian, black, white, Chinese, African and all in between and around (there are now more than 20 labels to choose from on a UK form asking about ethnicity), and whatever their job and size of bank account, I saw how people judged other people based on the colour of their skin even if they weren’t aware they were doing that. Note ‘people judged other people’ – a two-way street (e.g. Indian on white – not just the other way). And everyone’s at it. I suppose when you’re in a minority of any environment (as I definitely was/am), and when you happen to be the kind of kid who listens and watches intently, you develop a radar that picks up on prejudice way beyond, beneath and subtle than the kinds of things that appear in headlines… and I think that’s what my fellow yoga teacher had finally had enough of: picking up on the prejudices all her life, carrying that weight on her shoulders and then seeing and experiencing it all around here in the yoga sphere of all places. I understand her feeling. Though I come at this a little differently, from a place of – well, why should the yoga industry be any different?

I work in what is perceived or marketed as a ‘spiritual, holistic all is one and love’ industry (I’m ok with the ‘love and industry’ combo by the way, after all, people who are genuinely trying to develop more love and healing in the world are the very people we need to have able to look after themselves financially, yet it’s the nurses, mental health workers, teachers and the like who suffer and largely in silence because benevolence and money are deemed – wrongly – incompatible – that’s a whole other blog post…). But the yoga sphere – which encompasses more than the industry itself and includes its history and social dynamics – is plagued by race, patriarchy and class difference. It always has been. I went into yoga knowing this, but for me my aim has been a simple one: to share the practices in a way I can, and in a way that could be helpful to others. Whatever the history and present incarnations of yoga, from Indian renunciates in a Cave to well-off white women in Lulumelon, I knew what “I” got from yoga and would operate in the realms of sharing that.

So seeing that ‘invite’ to ‘Yogis of Colour’ was a jolt out of my personal (which encompasses the professional) relationship to the practice.

One of the first things that struck me was seeing the word ‘colour’! Seeing it so bluntly written down and in reference to a group of people. Growing up (I’m a kid of the 70s), you didn’t write down or say ‘colour’ in reference to anyone, be they black, brown, mixed or any shade between (a chap once called me cappuccino  – I thought that was creative…, but suggested I was more Bold Assam). There have been many changes over the years and interventions in terms of what is deemed socially accepted terminology in reference to races, ethnicities and heritages. Added to that, these changes haven’t been and still aren’t global. Words that cause tension or even riots in an Amercian state would not hold the same charge, or any, in an English town. Meanwhile, what we (in England) might find intolerable language could be part of regular parlance in an Asian city. And so on. The use of language in relation to race is as much a race relation issue as race itself. I won’t attempt to claim knowledge in this area, so please forgive me for letting the language issue of race be present but not the crux of this blog post, and no offence is meant to anyone (obvs).

It also felt weird for me to be personally referenced and included in a group based on ‘colour’. That is, having someone so openly ‘find me’ and ‘invite me’ to a formal gathering based on colour of skin was. No right or wrong but a rarity for me.

So the invitation stoked mixed emotions… about my relationship to my heritage, to yoga and to yoga’s place in London, the west and the world, and how I view the role of race in yoga. I sat with all these emotions. By the end of that day I decided I would not go to the gathering. I decided that on the basis it would be inauthentic of me to go to an ‘activist-based’ meetup when actually I didn’t feel those urges.

The next morning I changed my mind.

Maybe my ‘well I know the yoga world is as susceptible to human divisiveness as any other area in life’ and my personal intention of ‘just be the best yoga teacher you can be’ was… not enough?

So I went to the event. I cannot share what happened as everything that came up for people present was aired in confidentiality. I totally support that. I can say and I think it’s important to share that: the number was sizeable (the group was larger than I’d imagined it would be) and the event was very alive with emotion, rage, hurt, anger, outrage and… despondency. I was relatively silent in the midst of it. Listening, and trying not to judge – both others and my own reactions. Just listening and taking it in.

I came away with a greater realisation that… Race is a thing in the yoga world. How’s that for the greatest articulated (not) conclusion! But seriously…

Even in the lovely civilised ‘love is everything’ spiritually infused and patchouli fragranced world of yoga, race is definitely a thing. If we look at who is running the studios (who and for whom) and the lux yoga retreats in far-off places (serviced by the relatively poor, local indigenous populations) through to the most popular ‘yogis’ on instagram and the biggest-selling yoga conventions and workshops (who attends these, who runs them, who is synonymous with success in yoga?). But what came up at the gathering I attended filtered right down to women saying they are singled out in a class for having different hair and that they believe they have been not offered yoga teaching jobs based on the colour of their skin.

I left the gathering pondering what had been expressed by fellow Londoners, and holding that in my mind up against what is happening in the meantime in the ‘mother land’. In India, strong forces (government backed and propelled) are trying to re-assert Yoga as first and foremost the preserve of India, and that too a certain Indian sect. Then I thought about an area in the UK I once visited for a yoga workshop. In the centre there, there was a poster advertising ‘yoga for Islamic women only’. I remember having a mixed feeling about this, understanding on the one hand the cultural sensitivity and good intentions employed in creating this class, but on the other hand finding the ‘only’ ’bit excluding. It just seems to jar with what yoga is about… union.

Perhaps 2019 is the Year of things coming to surface – and needing to. In the world, in democracies, in the environment, and yes… in yoga gatherings. I don’t think there is ‘one’ way or only a ‘right’ way of doing this. I respect the woman and yoga teacher for her courage in creating the Yogis of Colour gathering. But for me – and this is speaking just for me and from my history – it feels divisive somehow. I know many will question that or even berate me for saying that. But I feel that if I start choosing to stand ‘over there’ – how will that make my students, clients, prospective students feel? More or less deserving of my attention? That I feel aggrieved? That I am different to them?

It’s a complex issue, rife with so many strands and interweaved with patriarchy, class systems, economics, education and religion.

Maybe that’s why… I keep coming back to my simple aim: to teach what I know, as best I can.

And to teach and share yoga as the preserve of none, and therefore all.

On a Monday night, for the past decade, I teach a class. It brims with more nationalities than I can even name. It’s a quiet joy because there is nothing political or right-on or deliberate about it. It’s so ‘naturally’ diverse, nothing contrived, that it isn’t a thing and it’s weird to even name it here. I know, I so  know, that in many spaces and places and areas of life ‘deliberation’ is needed to bring about unification and to eliminate discrimination. But breathing, de-stressing, moving, grounding and coming back into our hearts is precisely how and where we let go of the labels. Call me a yoga idealist, but if we teach and practice from this place, I believe the rest will come.

Happiness is not being Happy – & the 7 ingredients for having happiness in your life
May 1, 2022